For Who: People with a clitoris

Intensity: Somewhere between intense and “holy-shit-balls-turn-it-off-oh-god” on the higher levels

The magnetic charging options for the Satisfyer Pro 2 and the Satisfyer Pro Penguin is interesting; think of a newer macbook computer. The charger can easily be pulled away, with no fussing over the plugin point. The only thing I didn’t like about the charging is that both of the USB charged vibrators have a VERY bright light when they are charging. For me that means I have to put them in a room other than my bedroom to charge, because I hate blinking lights while I’m trying to sleep (the Satisfyer 2 is battery operated). 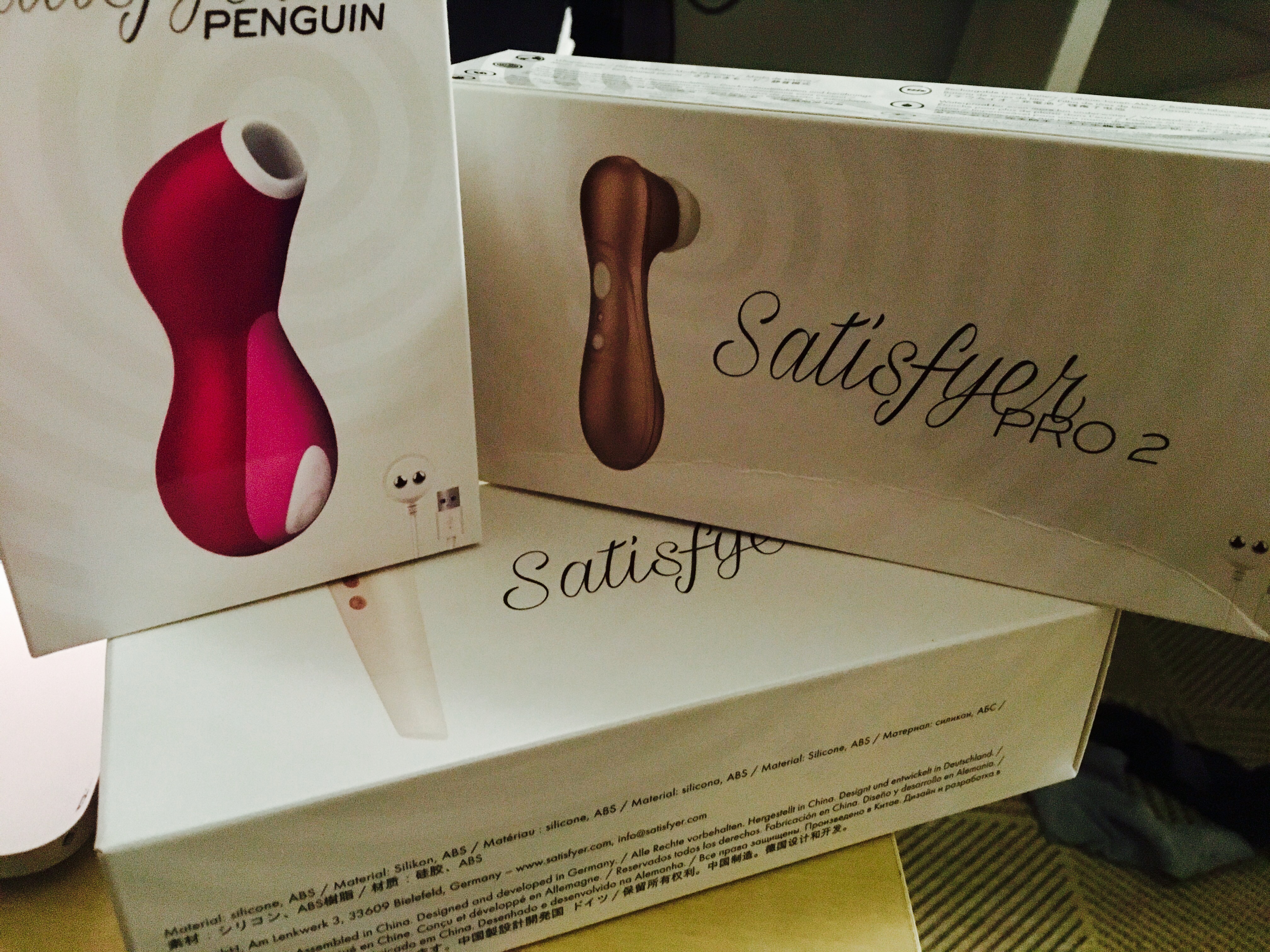 The packaging is OK. Almost on its way to quite nice, but you can tell that it isn’t a designer luxury brand like Lelo and it’s playful but not quite as playful and beautiful as FunFactory toys. The toy came with a huge pamphlet to accommodate several different languages, but I found that the actual information wasn’t that comprehensive in each language. For a unique toy like this one I would love to see a more localized (written for the specific language) booklet that had some images and “how to” involved. The Satisfyer website provides a bit more of a description in this way.

I have some concerns about the ability to keep the toy clean. The silicone ‘heads’ are replaceable and you can purchase them in packs of five. The cavity that accommodates the ‘sucky bit’ however, seems a bit more difficult to clean. I would recommend a nice toy cleaner like System Jo Unscented Basics Anti Bacterial Universal Toy Cleaner. I would also make sure to visually check the internal part of the toy often and clean it after every use.

I am sensitive to vibration. I find that direct clitoral stimulation from vibration is extremely intense. Not always intense in a bad way, but I can get overwhelmed with the sensation. For strong vibration I tend to like vibrators more like the Hitachi, where it covers a wide area and I can easily use it over a pair of panties to distribute the vibration to more places than just my clitoris.

I have to say that once I do achieve an orgasm with this toy it is a pretty awesome one, the kind where you have a hard time holding the toy in place because you’re kicking the sheets off the bed.

These vibrators sound like if dubstep, a very small duck, and a harley motorcycle for a hamster all had a baby. The noises vary from kind of quiet when they are in the right position to WUB WUB WUB WUB with some extra squishy hilarity if you move it at all. If you turn it while holding it and not using it, the sound is quite loud. The noise was a bit off-putting to me, and also resulted in some giggles during testing.

I was able to test out three different models that Satisfyer offers. I found that they have subtle differences, for better or for worse. I want to note that this isn’t their full line and they also have a Satisfyer Pro Deluxe model which I did not test.

The controls are split into an off/on and a speed adjustment, but they are almost on a ‘toggle’ in the one white button. You can’t hold down the mode-change button to increase the speed, every time you want to adjust the settings you need to push the button again. I wasn’t a fan of this, since I keep trying to hold down the button to adjust the speed since that is what felt most intuitive to me. The colors are also nice, in comparison to the rose-gold of the other two. I actually love rose gold, but going back to that subtle design quality thing, rose-gold either looks chic or a bit tacky.

The Satisfyer Pro 2 is probably the most ‘suck-like’ of the line. The mouth is a bit thicker and provides more of a seal when you put it in position. The result is probably the most unique feeling in my opinion, where Satisfyer executed what they were going for with the suction sensation. I still have yet to decide if that is a good thing or not (for me). At times it kind of hurts, and I felt like over time the suction got intense enough that I would need to stop and re-adjust before continuing.  The shape is fairly ergonomic, although larger than the Penguin and the controls are separate as opposed to combined on one ‘toggle’ button like the Penguin.

The Satisfyer Pro 2 is also a magnetic USB charged toy, and also has a bright ass LED light while you’re using it. The controls for all three are about the same usefulness (AKA you need to continually push buttons to change modes). I found that some of the lower levels would kind of sputter, where the suction wouldn’t be at even intervals and it would rumble a bit more than the other two.

The Satisfyer 2 was my least favorite out of the three. I think the design is the least appealing, from a visual standpoint and also a usability standpoint. The handle isn’t curved for gripping like the other two, and the white ABS plastic just plain doesn’t look nice. The controls are separated, and the general look of the controls is cheaper. The plus side is it doesn’t have a light to blind you, and the buttons actually function better even if they don’t look and feel as nice. The toy is also battery operated, which means that you could take the batteries out for travel and wouldn’t have to worry about it turning on and puttering away in your bag. The downside to taking it with you to travel is that it is also the biggest out of the collection, so it takes up the most space.

Considering the affordable price, I would recommend this toy for people who like direct clitoral stimulation and/or like to have hands-free play. I haven’t tested the Womananizer, which is a similar toy so I can’t fully compare it to any other “suction” vibration toys. I think that price VS the orgasmability and fun-factor means that it is a price-friendly toy to add to your collection if you’re looking to try something new.

As I mentioned above, I am going to recommend toys like this one to my friends who are trying to find a way to pleasure without a lot of vaginal contact. I think toys like this are a great way to experiment with this.

I would not recommend this toy to people who have sensitive clitorises and want more gentle vibrations or sensations. I also don’t consider it a super ‘couple friendly’ toy. The way the handle is shaped it is easiest for the owner of the clitoris to operate and not someone else.

Where to Buy it: Please find a reputable online or local sex shop to purchase sex toys. Avoid Amazon and Ebay for vibrators and other sex toys (you can find out why from the amazing Dangerous Lily). I live outside of the US, and because I primarily choose to purchase my toys in-person I don’t feel comfortable recommending a shop that I cannot fully vet. You can see Dangerous Lily’s recommendations.